The Origin of FileMaker

by Glenn Koenig, based on a telephone interview with Spec Bowers in December 2001
content last updated on 2 April 2004
text & photos reformatted for new web site 7 August 2015
​Minor edits and links updated on 3 January 2018

Wang Labs had a political culture back then, if you were on the inside track (essentially, if you were Chinese), you would get support for getting things done. The four of them wanted to develop some new products but the culture at Wang wasn't open to this.

At the time, Wang marketed a subset of what they had in mind. When they realized that they wouldn't have a chance to do everything they wanted to do there, they set out on their own. They decided to try something small then build up from there. Wang was almost alone in word processing. This was in 1982 and IBM had just started marketing the PC.

Around that time, Spec and Dan attended a computer conference. In those days, computer conferences for businesses concentrated on mini computers and larger. Outside the hall there was a tent that had a small section devoted to PCs. They looked around and saw that a number of other companies were already working on word processing products. They concluded that it would be too hard to break into that market.

So they looked at database software. In their opinion, the existing databases were just awful. dBase was one of them. The user interface was a prompt that was a single dot at the left edge of the screen. You had to know all the commands and type them in correctly to do anything. The records were all fixed format, with fields of fixed length and type. You had to decide everything ahead of time and once you started entering data, the design of your database was essentially frozen in place. You couldn't change anything after that.

Well, they knew what a good user interface looked like from working at Wang, so they decided to make something better. Around then, they formed Nashoba Systems. It started out in their own homes. Before long, they rented space in a building in Concord, Massachusetts at 175 Sudbury Road, right next to the railroad tracks. 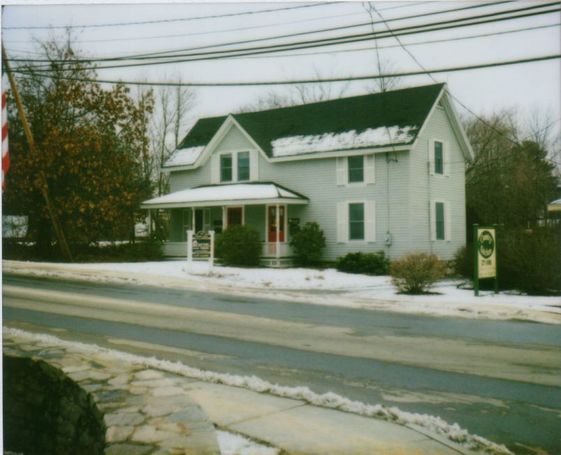 Spec Bowers came up with the initial design concepts:
- fields are variable length, you can enter as much data as you want
- every word in every field is indexed
- you can add fields at any time or delete them
- you can display your data in different layouts
- the user interface would be menu driven (a mouse came later)
- it would have good performance on even very large databases
- initially, it would support date, number, text, and calculation field types

Those were the basic important characteristics.

The Introduction of Nutshell

The first product was called "Nutshell." They developed it and marketed it through a company called "Leading Edge". Leading Edge marketed PC clones and software at the time. (The image below is of the 'Plus' version, which came along slightly later.)

The Introduction of FileMaker

Soon after they had Nutshell on the market, the Macintosh was introduced. But Leading Edge refused to sell to the Mac market so when Nashoba developed a version for the Macintosh, they had to use a different name. They came up with FileMaker. People who saw FileMaker later on would say "this looks a lot like Nutshell," but because of the different name, most people didn't know that it was essentially the same product. (The image below shows the "Plus" version)

They were close to finishing FileMaker when suddenly Microsoft released Microsoft File. It looked pretty good, so they were nervous. But they went ahead and released FileMaker. Microsoft started out being the big seller. Within a year, FileMaker was neck & neck. After 2 more years, FileMaker outsold MS File and Microsoft took their product off the market. Somehow the ordinary person looked at the products and saw the difference. These days Microsoft is so huge they'd probably succeed.

FileMaker started to do well right from the beginning because of good design and marketing and almost no other competition on the Mac side, whereas Leading Edge didn't market Nutshell very well. The competition on the PC side was dBase, PFS (which was the number 1 or 2 publisher at the time - PFS: Word, PFS: File PFS: Numbers, etc.), and several established products.

An interesting aside is that both Nutshell and FileMaker never had a Y2K problem. They had designed dates to range from year 0 to at least 3001, so they had essentially solved it years before it became a hot topic around the mid to late 1990s.

They had a company called Forethought market FileMaker. They had a great relationship with Forethought, even though it started out slowly. There were times when both Nashoba and Forthought went through financial difficulties. So Jega came up with an idea when it looked like Forethought was in big trouble. They changed the agreement for publishing to be more like a "partnership" in a way. It succeeded and they went on to be the best selling database. Spec thinks that this ought to be a lesson to teach at Harvard Business School.

They decided to track the names of Macintosh products when naming successive versions of FileMaker. When Apple came out with the Mac Plus, they named the next version "FileMaker Plus." When Apple introduced the Mac II, they called it "FileMaker II."

They were doing $6 million worth of business in 1986 or early 1987. Then Microsoft bought Forethought. Microsoft probably thought they were going to get the rights to market FileMaker in the deal. Spec says that if they thought that, then they had awful lawyers. They got PowerPoint out of it, even though it hadn't much of a track record (even that category wasn't big yet). Perhaps Microsoft reasoned that Nashoba systems, a smaller company without a publisher, would have no place else to go. But Nashoba still had the rights to FileMaker.

So they had to decide what to do. Should they sell to Microsoft anyway? Perhaps find another publisher? Self publish? Microsoft offered them a royalty deal of $75,000 a month. But FileMaker was a #1 product, making $6M a year, even without the Microsoft label. So Nashoba declined the offer. Eventually, they decided to self publish.

Of course, the product would be off the market for awhile while they geared up. It was kind of scary. They hired some of the marketing people from Forethought. Based on their previous contract with Forethought, Nashoba only had rights to the software itself, not the documentation or the packaging! So after a big crash effort to write documentation from scratch, they had to put the rest of the product together. They decided to name it "FileMaker 4." They had to make decisions about all those little things you find in the package when you buy software. What about warranty reply cards? What kind of box? How about package design? License wording? It was pretty scary to do it all in such a short time frame. In spite of all this, it went back to #1 in the market.

Then a new problem arose. They had hired a marketing VP from Forethought who wanted to be president of the company. It was almost like extortion. The four co-founders were split 2-2 on the promotion. Eventually, one of the founders gave in and they promoted him. Within a few months the morale at Nashoba had gone downhill badly. At this time, all the marketing was still in California and the technical people were here in Massachusetts. The president and California office staff took control of the documentation, of the tech support, and everything else and told the founders to just be good little geeks and go write the code.

Back in Concord, their 13 employees dwindled down to 6 people within 6 months. Two of the original founders quit as well. Spec was one of them. But each founder still owned almost a 1/4th of the company each.

Shortly after that, Claris approached them and asked if they could buy it. By now, there was enough support among the founders to vote to do this. It turned out that Claris didn't like dealing with Nashoba's new President, either! He kept adding conditions to the deal. But the deal survived and Claris got the product.

Claris began using conventional version numbers instead of varying the name of the product, so version 1.0 was Claris's first version. Since Apple wanted Claris to appear in the market as a stand alone software brand name, they were trying to make PC (DOS & Windows) versions of all their products, so it was under Claris that FileMaker was first expanded to run under Windows. Claris couldn't update Nutshell and sell that instead because they had no rights to it and by now FileMaker was a much more well recognized name.

Claris was a wholly owned subsidiary of Apple Computer. Later, Apple dissolved Claris and set up FileMaker, Inc. which had only two products: FileMaker and HomePage. The other products with the Claris name reverted to the Apple brand name (e.g. ClarisWorks became AppleWorks) or were discontinued (such as MacWrite, MacDraw, etc.). FileMaker, Inc. dropped support for HomePage a few years later and now just develops and markets FileMaker. (For those interested in trivia, the toll free telephone numbers for Claris were retained after the transition to FileMaker, Inc.: 800-325-2747 or 800-725-2747, spell 800-3-CLARIS and 800-7-CLARIS, respectively; both are still in use today.)

At the time of this interview, Spec remarked that some of the features they thought of 15 years ago still weren't in the product (as of version 6.0). Cross Tabs still weren't in the product. You still couldn't summarize horizontally and vertically at the same time. Also, if there was a way to import a ".pdf" file (Adobe Acrobat) into a layout, such as an IRS form, that would be great!

FileMaker, Inc. has made some changes since then. With the introduction of 7.0, some semblence of horizontal formatting can be achieved through the use of new portal controls, although some summarizing functions are still not implemented and must be obtained by using 'work arounds.' Also, container fields in FileMaker can now contain whole documents originally created by other software, including Microsoft Word (.doc), Adobe Acrobat (.pdf) and so on, although converting such documents into layout objects is still not supported.

Today, most of the 'workgroup database' market is dominated by FileMaker and Microsoft Access, although it's difficult to tell which product is most used. Access cannot be purchased alone; it is only available bundled with certain versions of the Microsoft Office suite. Therefore, it is not known how many of those who have purchased Office did so to obtain and use Access and how many purchased those particular versions of Office for other reasons. FileMaker products, on the other hand, are only available separately, so it can be assumed that one would not purchase a FileMaker product without the intention of using it. A white paper comparing the two products, written in 2002, is available on FileMaker's web site. At that time, version 5.5 was the current version. Now, with version 8.5, FileMaker, Inc. has since expanded the capacity, expandability, and features of the product extensively.

In recent versions, Filemaker, Inc. has incorporated features that allow FileMaker databases to exchange data with other database products, through the use of SQL and ODBC commands and additional support software.

Note: More information concerning the history of FileMaker is available on other web sites. I have also contributed to the article at Wikipedia.